INVERTO was been selected for inclusion in the FOREVER NOW project.
The selected artworks will be encoded on a golden record and launched into space …

“FOREVER NOW will be launched with a massive live event at the MONAFOMA Festival in Hobart, Tasmania on Sunday 18th January 2015. Selected audio and video works will be played/screened as part of this event, and streamed LIVE into deep space care of our partners Deep Space Communications in Florida USA.”
ABC Arts: making art for an extraterrestrial audience
GNN Pony: The marriage of gender and technology 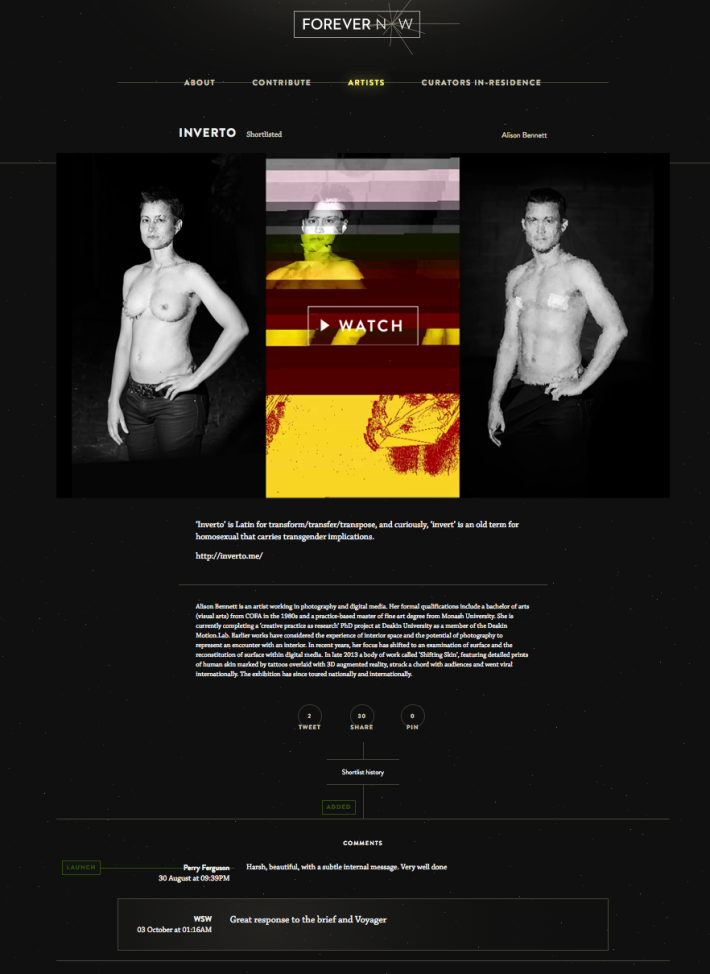 http://forevernow.me/
“Forever Now is a 21st century collection of artworks created to communicate to outer space. The democratic, opinionated and pop-inspired voice of this historical moment.
Contributed and collected from 118 different countries, Forever Now is this century’s response to the Voyager Records sent into space in 1977. It is a sequel and an update to that visionary gesture.
Conceived and directed by Willoh S.Weiland. Curated by Willoh S. Weiland, Brian Ritchie, Thea Baumann & Jeff Khan.”

a glitchy take on the technology of gender

INVERTO is a series of photographs taken monthly over two years bearing witness to an individual undertaking the process of physically aligning gender identity and embodied presence. The images demonstrate the impact of hormone therapy (testosterone) and gender reassignment surgery (double mastectomy, aka ‘top surgery’) following pregnancy. The images are presented as a glitchy time-lapse animation, reflecting something of the flicker and disjunction of the subject’s transgender experience.

This  work by Alison Bennett will launch this coming January 2015. It has been selected for inclusion in the FOREVER NOW project, a curated international collection of artworks that will be beamed into space and launched at MONA FOMA 18 January 2015. Inverto will then feature at MIDSUMMA’S TESTING GROUNDS in Melbourne on the evening of 29 January as part of the Midsumma Festival.

‘Inverto’ is Latin for transform/transfer/transpose, and curiously, ‘invert’ is an old term for homosexual that carries transgender implications.

The animation images have been put through a ‘glitch’ process. As Bennett explains, “this genre within digital art practice is viewed as a means of breaking the hermetic seal of the technology, a way of understanding the medium by breaking the limits of what the medium can do. I wanted to explore this metaphor with the technology of gender and present these images as a crack in the seal of gender construction. Judith Butler introduced the concept of gender as performance. I am interested in the notion of considering gender as a technology, or a set of technologies. Make up, hair and clothing are just as much a part of that technology as hormone therapy and surgery. Like the metaphor of the cyborg, we are co-created by our technologies – we make them and they make us. The technologies we use are the structures that facilitate the conceptual models through which we understand our experience.”

ALISON BENNETT is an artist working in photography and digital media currently completing a ‘creative practice as research’ PhD at Deakin University as a member of the Deakin Motion.Lab. In late 2013 a body of work called ‘Shifting Skin’, featuring detailed prints of human skin marked by tattoos overlaid with 3D augmented reality, struck a chord with audiences and received international viral media attention, including Mashable, Huffington Post, Nigerian television and ABC TV evening news bulletin. The exhibition has since  toured nationally and internationally.