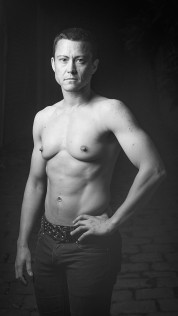 ‘Inverto’ is Latin for transform/transfer/transpose, and curiously, ‘invert’ is an old term for homosexual that carries transgender implications. Inverto is a series of photographs taken monthly over two years bearing witness to an individual undertaking the process of physically aligning gender identity with embodied presence. The images demonstrate the impact of hormone therapy and gender reassignment surgery following pregnancy over a period of two years. The images have been compiled as a glitchy time-lapse animation, reflecting a glimpse into the disjunction of the inner and outer worlds of the subject’s transgender experience.

Bennett, A & Kearns, AJ, 2015, ‘Inverto #19’ [photograph] in ‘Best Australian Photographs of 2015’, The Guardian, 31 Dec 2015
“Inverto 19 by Alison Bennett, one of a a series of 24 images taken over a two-year period charting gender reassignment in her subject, AJ Kearns. ‘This was a unique opportunity,’ says Bennett, because ‘the medical team were not aware of another case in which a transman had chosen to delay transition in order to have a baby’. This image was the winner of the CCP Salon portraiture prize in 2015.”

In the days following the broadcast of Australian Story ‘From Daddy’s Tummy’ on ABC TV, the story went viral and was covered in dozens of languages.

Cohen, J 2015, ‘AJ Kearns in photographs: The father who gave birth’, ABC News, 10 Aug
“One of the things I like about photography is its capacity to compress time and to very succinctly give a vast, huge story all at once.”

Sainty, L 2015, ‘This Man Postponed His Gender Transition To Have A Baby’, Buzzfeed, 10 Aug
“Melbourne artist Alison Bennett documented Kearns’ pregnancy and transition with a series of stunning photographs.”

ABC TV Australian Story 2015, ‘From Daddy’s Tummy’, 10 Aug, featuring images from Inverto and the story behind the project http://goo.gl/X4zZFc

Bennett, A 2015, ‘Inverto’, Ada: A Journal of Gender, New Media, and Technology, No.7
“Inverto is Latin for transform/transfer/transpose, and curiously, ‘invert’ is an old term for homosexual that carries transgender implications.”

Cahill, H 2015, ‘Can science remove gender boundaries completely?’, Dazed & Confused, UK, 26 Feb 2015
“Inverto depicts an astonishing transformation enabled by hormone therapy and a double mastectomy following pregnancy. Not only is the two-year project a stunning testament to the technologies available for trans people wishing to redefine themselves, the photos themselves are a crucial part of the journey.”