This series of online interactive & touch screen works considers the convergence of biological & digital skin as virtual prosthesis. Reworlding (Elizabeth) was awarded for Innovative Use of Digital Media at the 2016 CCP Salon, included in ‘Crossroads’ at the San Francisco Museum of Modern Art, & long-listed for the 2017 Lumen Prize at V&A Digital Futures. Bruise, exhibited at RMIT Gallery as part of ‘Morbis Artis’, featured in an article about bio art on CNN. Works from the Wrap series were included in #nfcdab wrocław biennale of digital & internet art in Poland.

Reworlding (Elizabeth) is an online interactive collaborative work by artists Alison Bennett and Greg Penn, with writers Jeremy Martino and Autumn Royal. The work offers a multidisciplinary investigation into the concept of digital-hybridity and artificial intelligence. The collective process in producing the work imitates the technological and physical layers we often encounter to expose the limitation of the dichotomy between the representational and the real.’ Reworlding (Elizabeth) won the Centre for Contemporary Photography Salon Award for Innovative Use of Digital Media in 2016 and long-listed for the 2017 Lumen Prize.

ELIZABETH is a technological agent that has emerged out of a space created by an artistic collaboration between four artists: photographers Alison Bennett and Greg Penn, with writers Jeremy Martino and Autumn Royal.The audience is invited to complete the work through a dialogical engagement with Elizabeth’s polyphonic ambience and visceral touch screen surfaces. The work offers a multidisciplinary investigation into the concept of digital-hybridity and virtual autonomy. The collective process of producing the work imitates the technological and physical layers we often encounter to expose the limitation of the dichotomy between the representational and the real. The first iteration of Reworlding (Elizabeth) was created for a live webinar event between the HDR/PhD Communities from the Centre for Dance Research, Coventry University and Deakin Motion.Lab Centre for Creative Arts Research at Deakin University. The participants were given the prompt: what is digital life in a hybrid world? Reworlding (Elizabeth) was the Deakin response. http://reworlding.xyz/ 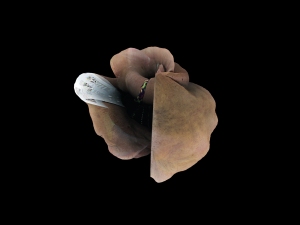 Redmond, S & Verhagen, D 2017, ‘Of microbes and machines: How art and science fuse in bio-art’, CNN Style, 7 Feb
“In Alison Bennett’s touch-based screen work, the viewer is presented with a high-resolution scan of bruised skin. Viewers can use the touch-screen to manipulate the soft and damaged tissue before them, and their eyes become organs of touch. What does it feel like to touch a bruise and be bruised?”

Leach, S 2016, ‘The Ghosts in the Machines: Morbis Artis’, The Article, 5 Dec
“The damaged human body is aestheticised in Alison Bennett’s Bruise, an interactive video work in which bruised human flesh can be manipulated and moved on a screen. The viewer seemingly touching and manipulating the damaged organ, just to see how it looks, reminiscent of the Iain M Banks’ bruise artist in his SF novel Use of Weapons.”