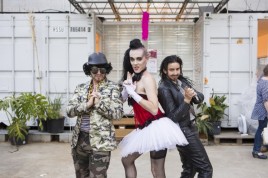 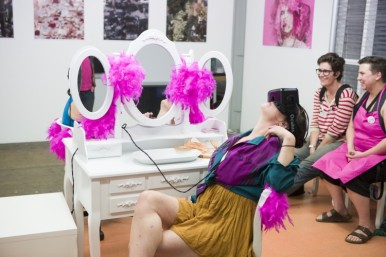 The intersections between virtuality and drag stem from ways of speaking about virtual reality as simulation and the drag definition of ‘realness’. Virtual Drag generated a small buzz internationally in new media art circles. This project has been assisted by the Australian Government through the Australia Council for the Arts, its arts funding and advisory body, Deakin Motion.Lab & Media Lab Melbourne.

‘Virtual Life’s a Drag: Queering VR’ [panel], SXSW Interactive, Austin TX, 13 Mar 2017
“Virtuality and queerness share common conceptual ground. They each destabilize what is natural/taken for granted by emphasizing the performed and experienced rather than what is ‘objectively real’. This panel will explore this conceptual congruence.”

Pennello, A 2016, ‘Inside Berlin’s Queer Tech Festival’, Motherboard
“I strap on the goggles and find myself in the middle of a snowy mountain range, gliding up an icy staircase where a drag queen poses over and over again: hands on her hips, a pouty face, a jump in mid-air.”

Bennett, A 2016, ‘Virtual Drag’ [paper], UNIT QueerTech Conference, Berlin, 16 Apr
“The intersections between virtuality and drag stem from ways of speaking about virtual reality as simulation and the drag definition of ‘realness’. This presentation discusses the making of the virtual reality work ‘Virtual Drag’ and unpacks the theoretical propositions that underpin the project.”

Priestman, C 2016, ‘Virtual Drag, or how to queer virtual reality’, Kill Screen, 28 Jan
“In both, the notion of ‘realness’ is brought into question—quite simply, what we accept to be real, shown to be a construction of human making. And so, by bringing drag queens and kings into virtual reality, Virtual Drag doubles their implications, letting their deconstructions overlap in an astonishing synergy.”

Bruney, G 2016, ‘3D Body Scans of Drag Queens Virtual Reality Art’, The Creators Project, 24 Jan
“All art forms rooted in the performers’ physicality struggle to perfectly translate via technological replication. But three Australian artists have found a way to harness the physicality of drag performers in for their project Virtual Drag, in which they created 3D body scans of drag queens for audiences to view in virtual reality.”